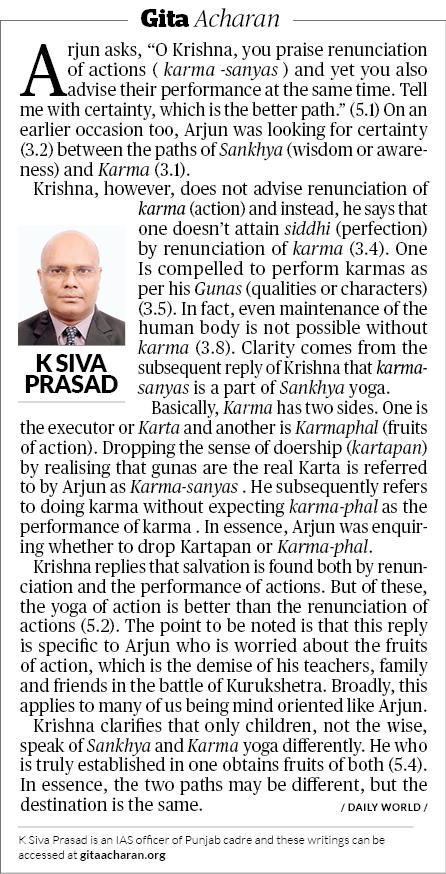 Arjun asks, "O Krishna, you praise renunciation of actions (karma -sanyas) and yet you also advise their performance at the same time. Tell me with certainty, which is the better path." (5.1) On an earlier occasion too, Arjun was looking for certainty (3.2) between the paths of Sankhya (wisdom or awareness) and Karma (3.1).

Krishna, however, does not advise renunciation of karma (action) and instead, he says that one doesn't attain siddhi (perfection) by renunciation of karma (3.4). One Is compelled to perform karmas as per his Gunas (qualities or characters) (3.5). In fact, even maintenance of the human body is not possible without karma (3.😎. Clarity comes from the subsequent reply of Krishna that karma-sanyas is a part of Sankhya yoga.

Basically, Karma has two sides. One is the executor or Karta and another is Karmaphal (fruits of action). Dropping the sense of doership (kartapan) by realising that gunas are the real Karta is referred to by Arjun as Karma-sanyas. He subsequently refers to doing karma without expecting karma-phal as the performance of karma. In essence, Arjun was enquiring whether to drop Kartapan or Karma-phal.

Krishna replies that salvation is found both by renunciation and the performance of actions. But of these, the yoga of action is better than the renunciation of actions (5.2). The point to be noted is that this reply is specific to Arjun who is worried about the fruits of action, which is the demise of his teachers, family and friends in the battle of Kurukshetra. Broadly, this applies to many of us being mind oriented like Arjun.

Krishna clarifies that only children, not the wise, speak of Sankhya and Karma yoga differently. He who is truly established in one obtains fruits of both (5.4). In essence, the two paths may be different, but the destination is the same.