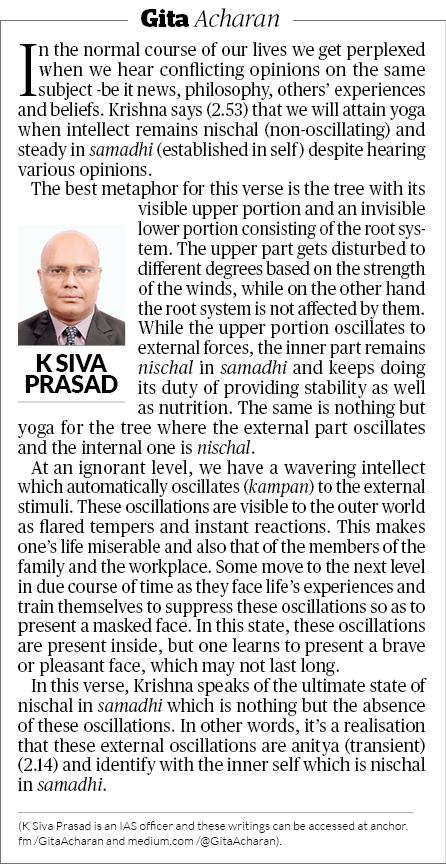 In the normal course of our lives we get perplexed when we hear conflicting opinions on the same subject -be it news, philosophy, others’ experiences and beliefs. Krishna says (2.53) that we will attain yoga when intellect remains nischal (non-oscillating) and steady in samadhi (established in self) despite hearing various opinions.

The best metaphor for this verse is the tree with its visible upper portion and an invisible lower portion consisting of the root system. The upper part gets disturbed to different degrees based on the strength of the winds, while on the other hand the root system is not affected by them. While the upper portion oscillates to external forces, the inner part remains nischal in samadhi and keeps doing its duty of providing stability as well as nutrition. The same is nothing but yoga for the tree where the external part oscillates and the internal one is nischal.

At an ignorant level, we have a wavering intellect which automatically oscillates (kampan) to the external stimuli. These oscillations are visible to the outer world as flared tempers and instant reactions. This makes one's life miserable and also that of the members of the family and the workplace. Some move to the next level in due course of time as they face life’s experiences and train themselves to suppress these oscillations so as to present a masked face. In this state, these oscillations are present inside, but one learns to present a brave or pleasant face, which may not last long.