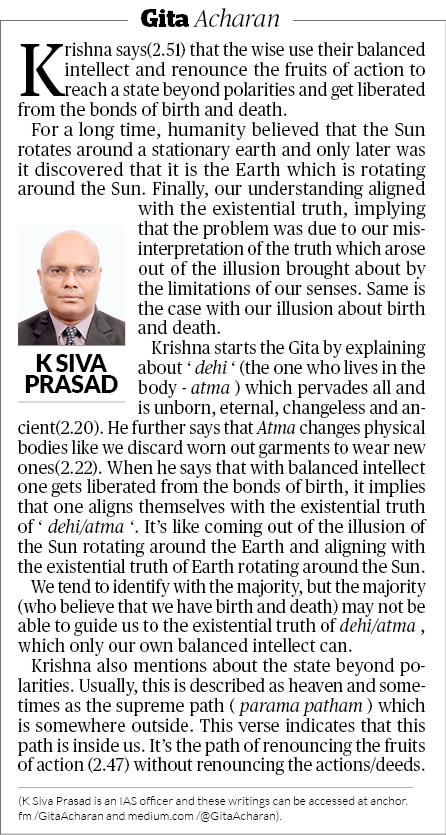 Krishna says(2.51) that the wise use their balanced intellect and renounce the fruits of action to reach a state beyond polarities and get liberated from the bonds of birth and death.

For a long time, humanity believed that the Sun rotates around a stationary earth and only later was it discovered that it is the Earth which is rotating around the Sun. Finally, our understanding aligned with the existential truth, implying that the problem was due to our misinterpretation of the truth which arose out of the illusion brought about by the limitations of our senses. Same is the case with our illusion about birth and death.

Krishna starts the Gita by explaining about 'dehi' (the one who lives in the body -atma) which pervades all and is unborn, eternal, changeless and ancient(2.20). He further says that Atma changes physical bodies like we discard worn out garments to wear new ones(2.22). When he says that with balanced intellect one gets liberated from the bonds of birth, it implies that one aligns themselves with the existential truth of 'dehi/atma'. It's like coming out of the illusion of the Sun rotating around the Earth and aligning with the existential truth of Earth rotating around the Sun.

We tend to identify with the majority, but the majority (who believe that we have birth and death) may not be able to guide us to the existential truth of dehi/atma, which only our own balanced intellect can.

Krishna also mentions about the state beyond polarities. Usually, this is described as heaven and sometimes as the supreme path (parama patham) which is somewhere outside. This verse indicates that this path is inside us. It's the path of renouncing the fruits of action (2.47) without renouncing the actions/deeds.