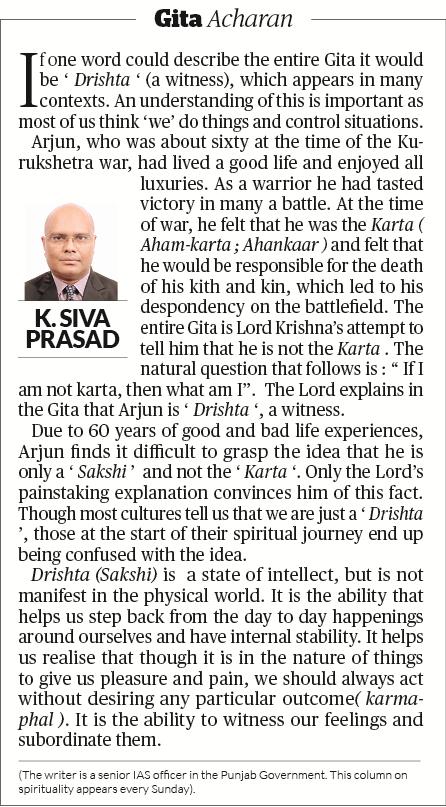 If one word could describe the entire Gita it would be ' Drishta ' (a witness), which appears in many contexts. An understanding of this is important as most of us think 'we' do things and control situations.

Arjun, who was about sixty at the time of the Kurukshetra war, had lived a good life and enjoyed all luxuries. As a warrior he had tasted victory in many a battle. At the time of war, he felt that he was the Karta ( Aham-karta ; Ahankaar ) and felt that he would be responsible for the death of his kith and kin, which led to his despondency on the battlefield. The entire Gita is Lord Krishna’s attempt to tell him that he is not the Karta . The natural question that follows is : “ If I am not karta, then what am I”.  The Lord explains in the Gita that Arjun is ' Drishta ', a witness.

Due to 60 years of good and bad life experiences, Arjun finds it difficult to grasp the idea that he is only a ‘ Sakshi ’  and not the ' Karta '. Only the Lord’s painstaking explanation convinces him of this fact. Though most cultures tell us that we are just a ‘ Drishta ’, those at the start of their spiritual journey end up being confused with the idea.

Drishta (Sakshi) is  a state of intellect, but is not manifest in the physical world. It is the ability that helps us step back from the day to day happenings around ourselves and have internal stability. It helps us realise that though it is in the nature of things  to give us pleasure and pain, we should always act without desiring any particular outcome( karma-phal ). It is the ability to witness our feelings and subordinate them.