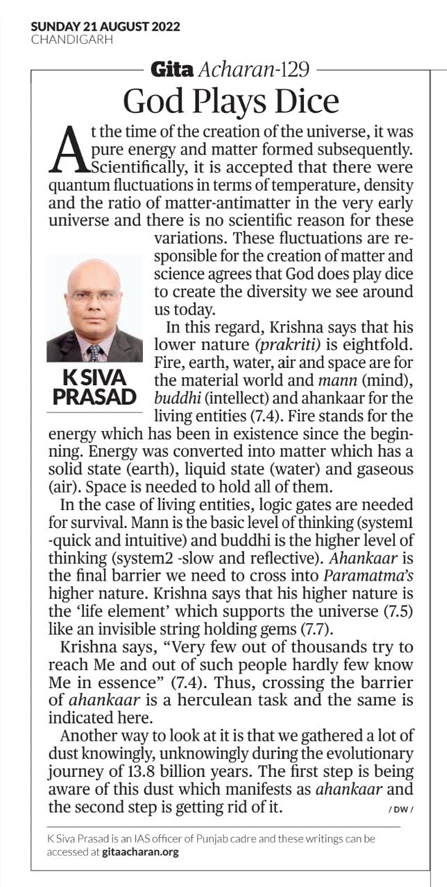 At the time of the creation of the universe, it was pure energy and matter formed subsequently. Scientifically, it is accepted that there were quantum fluctuations in terms of temperature, density and the ratio of matter-antimatter in the very early universe and there is no scientific reason for these variations. These fluctuations are responsible for the creation of matter and science agrees that God does play dice to create the diversity we see around us today.

In this regard, Krishna says that his lower nature (prakriti) is eightfold. Fire, earth, water, air and space are for the material world and mann (mind), buddhi (intellect) and ahankaar for the living entities (7.4). Fire stands for the energy which has been in existence since the beginning. Energy was converted into matter which has a solid state (earth), liquid state (water) and gaseous (air). Space is needed to hold all of them.

In the case of living entities, logic gates are needed for survival. Mann is the basic level of thinking (system1 -quick and intuitive) and buddhi is the higher level of thinking (system2 -slow and reflective). Ahankaar is the final barrier we need to cross into Paramatma's higher nature. Krishna says that his higher nature is the 'life element' which supports the universe (7.5) like an invisible string holding gems (7.7).

Krishna says, "Very few out of thousands try to reach Me and out of such people hardly few know Me in essence" (7.4). Thus, crossing the barrier of ahankaar is a herculean task and the same is indicated here.

Another way to look at it is that we gathered a lot of dust knowingly, unknowingly during the evolutionary journey of 13.8 billion years. The first step is being aware of this dust which manifests as ahankaar and the second step is getting rid of it.